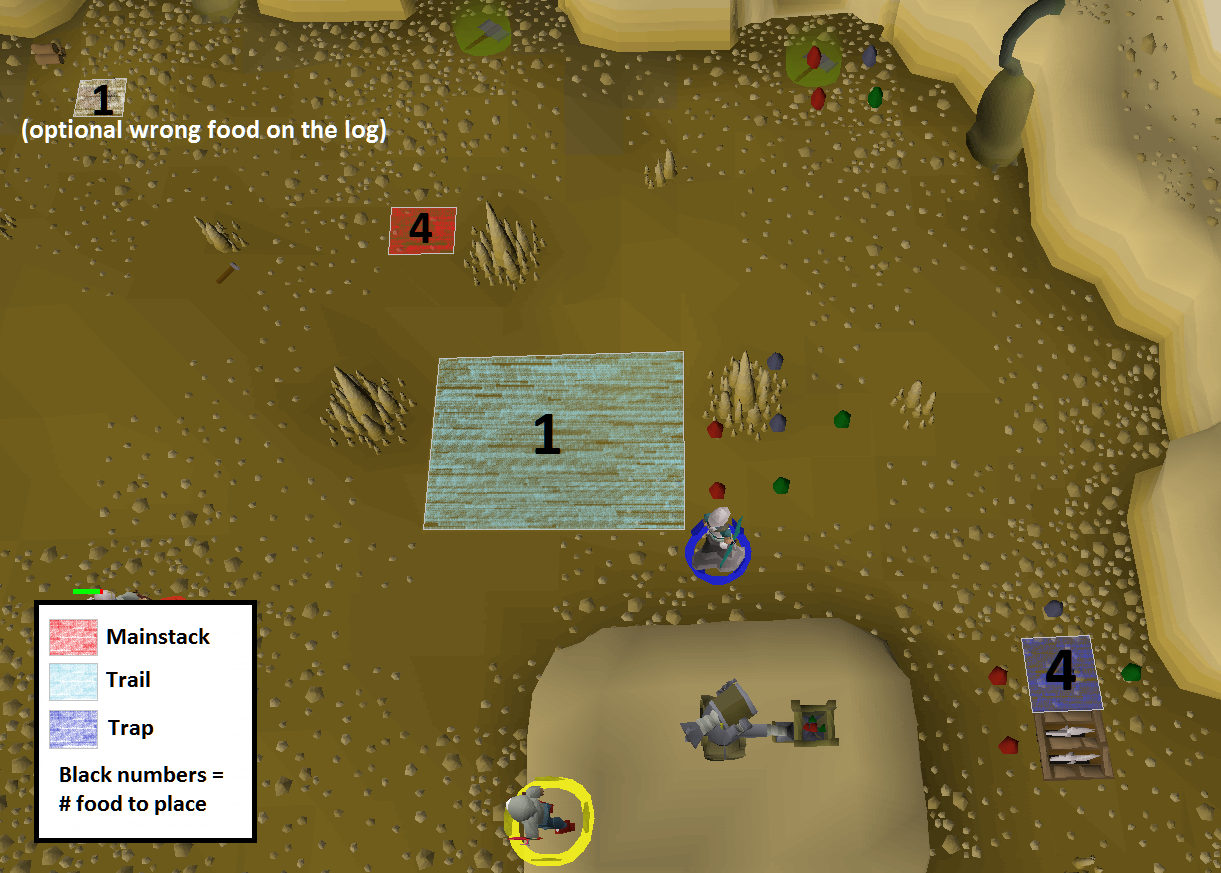 Waves 1-4: don't delay just rush drop the food going for early runner spawns.
Wave 5+: Delay under cannon for the second healer to spawn (12s into the round), delay on the mainstack if the third healer targets you or if the first two re-aggroed you, get hammer and logs and return to trap.
The faster you are the easier it is to make it to trap on time and the better the healer spreads are. The way you move can vary. Some people like doing a loop lure or running along north wall to kite the healers, others like doing a simple hammer lure. It’s important that the first two healers are far east to reduce the chance that they target runner -> target attacker.
Jad Lost's multikilling tutorial. Correct for 1-9, but not 10.

Skip to 3:08 on the video below or click this link.

W1 30s (video incorrect - it is possible to always 30s w1)
2 food on trap, 2 on main stack
any-W Block the last runner from going west. If you're fast enough you can do this just 2 sqares from spawn and make it back to trap to multikill if the first runner was east. It's easier to block on the last west square though.
E-any Run back to the trap and multikill

You can also block early easties 1 tick as the video demonstrates but E-E will result in 36s end.
Blocking 1 tick is mainly useful for Wave 3 where running to multi the early east would lose the 24s spawn.

W3 48s unless first goes West (54s)
4 food on trap, do wave 1 tactics on first two runners to get 24 30 spawns, get 1 log.
After repairing, block the last runner. If 3rd is east stay at trap instead for multikill.

W4 always 48s
Let healer run up first, kill the runners 1-3 or 2-2, stand still so the healer can corner trap the last healer.

W6/7
Drop 4 food on trap, be quick, if the 3rd healer doesn’t target you, you can skip mainstack delay and usually make it to trap on (1).

W9
4 food on trap, 4+ food on main stack, get 2 logs, 2-5-2
lure the 54 west of cannon before repairing
If 48 just let it go and keep in mind to get it if it re-aggros. Also be careful not to stack re-aggros with reserves. Sometimes it can’t be helped.

W10
Delay under that little spike under trap and watch the runner cave. When the second runner spawns, the second healer has spawned. Drop trap food and trail food then delay for re-aggros and stand next to the healer cave for the fourth healer to spawn.
Kill the runners 2-3-1, standing north of trap to trap the 42 spawn. Run out 6 seconds before the last healer spawns and lure them 2 in cubby and 1 east of cannon. 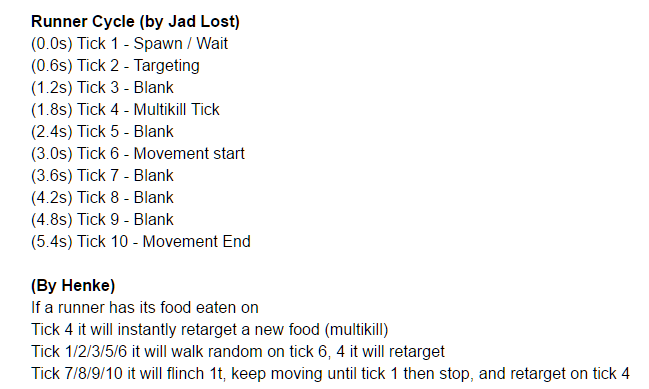 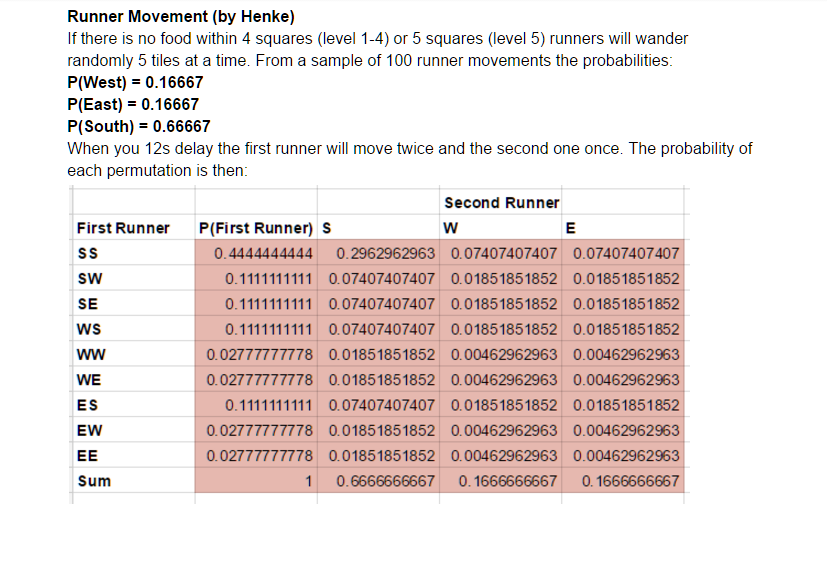 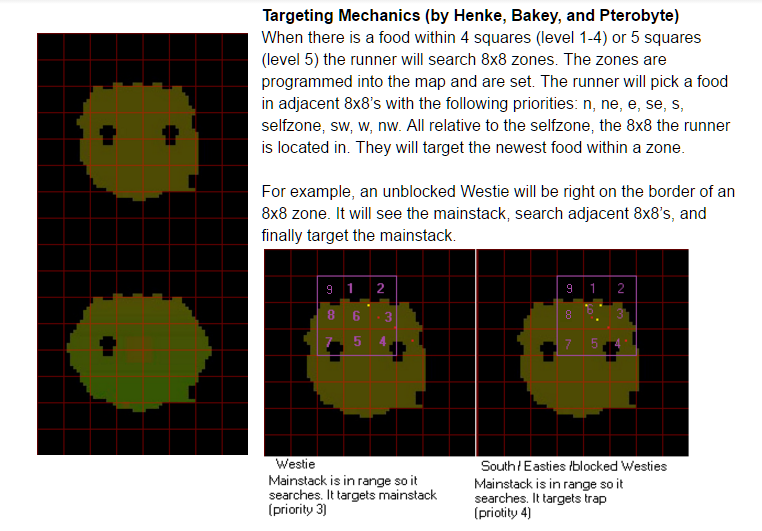 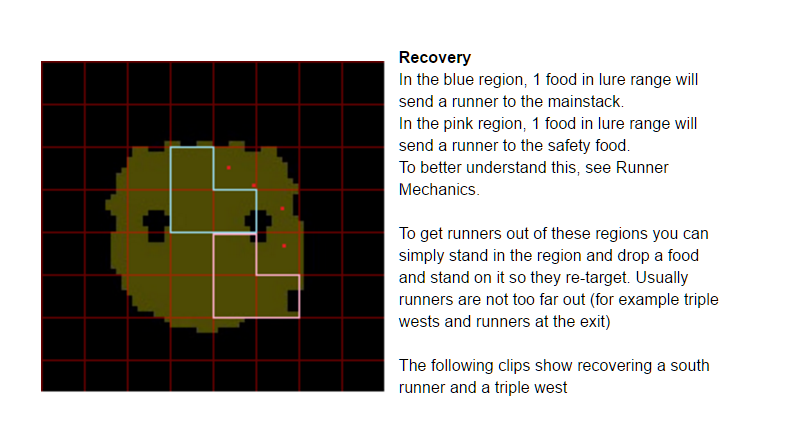 respect for throwback soundtrack man
You must log in or register to reply here.